Can Identity Uncertainty Up Your Addiction Risk?

While it’s true that no two human beings are exactly alike, there is an inherent desire that links everyone, no matter where you happen to call home. Whether it’s the far-flung reaches of the Amazon rainforest or a house with a neat lawn nestled in US suburbia, people share the need to belong.

In his groundbreaking research, Polish social psychologist Henri Tajfel built upon this idea with social identity theory. Making the connection between people’s innate sense of who they are based on the group — or in some cases groups — they’re part of, Tajfel discovered that whether it was a family unit, a football team, or even a specific social class, membership provided a distinct sense of self-esteem, pride, and even belonging to society at-large.

When people have identified a group(s) they belong to, they also adopt the identity of the group itself.

As a result, when people have identified a group(s) they belong to, they also adopt the identity of the group itself. Circling back to that football team reference, the person with a sense of belonging as, say, the team’s wide receiver, will begin to conform to the norms of the group, which adds emotional significance to your role as a teammate.

What Happens When Uncertainty Enters the Picture?

On the flip side, when someone isn’t quite sure where he or she belongs, the fear of not fitting in — and the resulting negative impact on self-esteem — paints another picture entirely.

For those who struggle with sexual identity uncertainty, social isolation and a lack of belonging often factor into the equation. Not only does fear of rejection loom large on a macro level for many who struggle to identify where they best fit, but the idea of not being accepted by family or their closest peers can leave them seeking solace in groups who don’t necessarily have their best interests in mind.

In an effort to find a safe space to “fit in” without looming discrimination, many in the LGBTQ+ community will seek out like-minded company in bars and clubs. And while we’ve made progress, ongoing discrimination or rejection by loved ones can make the numbing effects of alcohol and drugs tempting. So it’s not surprising that people who identify as gay or lesbian are more than twice as likely as those who identify as heterosexual to have a severe alcohol or tobacco use disorder, according to The National Survey on Drug Use and Health’s annual report.

For those unsure of how to identify themselves sexually, described as “the extent to which an individual is uncertain about which sexual identity label best captures their pattern of attractions and behavior” by the American Psychological Association, the numbers are particularly harrowing.

The same report from The National Survey on Drug Use and Health referenced earlier indicates they are “five times as likely to have a substance use disorder than heterosexual people.”

Often adding to the confusion are fears of how they’ll be perceived if they choose to have a relationship with one gender over the other. What might make someone else happy or more comfortable, as opposed to their own desires, can also contribute to stress in being able to ascertain sexual identity. Once again, the innate desire to be part of a group, even the wrong one, remains a priority.

It’s no secret that living life in an affirming, loving community is far preferable to navigating life alone — or feeling judgment or a lack of belonging about your true identity and orientation. 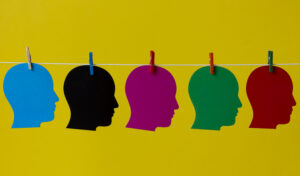 Helping to provide encouragement and empowerment while working to overcome past hardship and isolation, Coming Home is a workshop we offer at Rio Retreat Center is a workshop tailor-made with the specific needs and unique experiences of the LGBTQ+ community in mind.

Led by a caring, knowledgeable staff who identifies in the community, Coming Home is an experiential workshop that helps participants tap into empowerment and resilience without hiding or compromising who they are.

For more information or to register for Coming Home, don’t hesitate to reach out.