Suicide and the Black Community

Arlana Miller, a 19-year-old college cheerleader at a historically Black university, had thought about suicide for several years. But in May of 2022, overwhelmed by the impact of COVID, a sports injury, and failing grades, she shared her mental health struggle on social media and gave up the fight.

The distressing part is, she’s far from alone in choosing that path. Suicide rates in the Black community are growing at an alarming rate. Consider these heartbreaking statistics about the growing crisis of Black suicide rates: 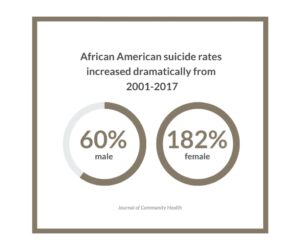 Acknowledging the crisis, Congresswoman Bonnie Watson Coleman (D-NJ) and the Congressional Black Caucus established an emergency task force on Black youth suicide and mental health in 2018. Their report, Ring the Alarm: The Crisis of Black Youth Suicide in America, was an “urgent call to action” for all Americans.

Unfortunately for Arlana and thousands of others like her, it was too little, too late.

Why is This Happening?

This crisis-level spike in the African American suicide rate didn’t just happen in a vacuum. It is intricately connected to a marginalized community facing challenging risk factors, reports TIME.

“People who feel marginalized, who don’t feel like their lives are of value … are going to be more at risk of suicide,” says Rheeda Walker, who researches African American mental health at the University of Houston.

What are some of the risk factors that play a role in the increase of African American suicide rates nationwide?

Teachers and school administrators don’t always know the signs of a mental health crisis, nor the resources to offer when students show signs.

Black youth have higher rates of suicide mortality because they often have more lethal means.

Being seen as “weak” or “crazy,” or as not having enough faith, are cultural barriers for many who are in need of help.

Black girls are especially at risk for self-harm. Recent research from the Journal of the American Academy of Child and Adolescent Psychiatry reports suicide has increased up to 6.6% per year from 2003 to 2017 for Black girls between the age of 15 to 17. Young women of color, like Arlana Miller, struggle with mental health issues, interpersonal relationship stressors, and social media pressure to look and be perfect, while their communities either have very little clue and little to no resources to offer.

The Role of Racism

All of these risk factors beg the obvious question: What role does racism play in the Black suicide rate crisis? A considerable one, given that up until suicide rates among Black youth began peaking dramatically in the early 2000s, very little research existed documenting suicide rates in the Black community at all. It was happening, but not even the science and medical communities that study these issues had begun to explore why.

There is no doubt that having experienced racial trauma can increase the risk of suicide. A 2020 study in the Journal of Applied Developmental Psychology found a strong correlation between racial discrimination and symptoms of depression in Black teens. According to the study, Black teens experience five racially traumatic or discriminating events every day. How could this not impact mental health?

Black teens experience five racially traumatic or discriminating events every day. How could this not impact mental health?

We all know that bullying exacts a terrible toll on any child who experiences it. But for Black children, bullying is often racially motivated. And racist bullying isn’t limited to the playground. The majority of racial trauma is perpetrated online, in apps, and on social media where racist bullying is highly targetable and somewhat anonymous behind a screen, 24/7. Authorities often don’t check or hold anyone accountable.

What Can Be Done?

Thankfully, in the years since the Congressional Black Caucus rang the alarm on Black youth suicide rates, new initiatives have begun to help educators and parents better recognize the signs and symptoms of depression, bipolar disorder, and other mental health issues. These include:

Here at Rio Retreat Center at The Meadows, we recognize the ongoing crisis of racialized trauma and its impact on people of color. The Racialized Trauma, Resilience, and Healing workshop directed by Meadows Senior Fellow Resmaa Menakem, helps professionals understand and explore:

This in-depth workshop is just one of the ways we aim to light the path forward as we recognize the need for increased racial discrimination education and research specific to mental health issues in Black communities. To participate in this workshop or any other of our workshops designed to help educate and heal those struggling with trauma, broken relationships, family and personal issues, reach out today.