When Adult Children Cut Off Their Parents

While much has changed about the world since Leo Tolstoy’s Anna Karenina was published in 1878, a portion of the novel’s opening line still resonates today: “Each unhappy family is unhappy in its own way.” The reasons for strained relationships, enduring rifts, and complicated dynamics are often as unique as the people involved. And for an increasing number of families these days, tensions run so high that estrangement from one another is common.

According to a recent Newsweek report, one in four adult Americans are estranged from a family member. That translates to roughly 67 million people, if not more, given how many may not acknowledge the problem.

So why are an increasingly high number of adult children cutting off parents in particular? The reasons for an estranged adult child-parent relationship are far flung and wide reaching.

Sociologist Karl Pillemar, a professor of gerontology in medicine at Weill Cornell Medicine and author of Fault Lines: Fractured Families and How to Mend Them, describes estrangement as “a very widespread problem that was hiding in plain sight.”

Whether your childhood was happy, difficult, or somewhere in between, parents can’t help but play a significant role in our lives and development. Which is why there’s still a desire to connect — even simply out of moral obligation — when the relationship is less than perfect.

As adult sons and daughters become more aware of the importance of good mental health, many are cutting off toxic parents despite how difficult this may be.

But as adult sons and daughters become more aware of the importance of good mental health, many are cutting off toxic parents despite how difficult this may be. This phenomenon has even included well-known celebrities such as Britney Spears, Meghan Markle, Jennifer Aniston, rapper Eminem, and NFL quarterback Aaron Rodgers.

For some, the decision stems from a traumatic childhood where there was physical, emotional, or sexual abuse. For others, it boils down to growing up in an unhealthy, dysfunctional household with parent(s) struggling with alcohol or drug addiction, according to VeryWellFamily.com.

Other reasons for estrangement may include:

Embracing the Possibility of Reconnecting

VeryWellFamily.com also shared a study conducted by the University of Cambridge in tandem with nonprofit organization Stand Alone that revealed that estrangement from a mother or father isn’t always permanent.

For many who’ve experienced an estranged adult child parent relationship, it’s a mixed bag of feelings and expectations regarding reconciliation.

The most common occurrence of cutting off parents is between adult children and their fathers. When this happens, it lasts an average of nearly eight years. With mothers, it’s often less with an average of five and a half years; however, there can also be other complexities that surface as a result of a strained mother-daughter relationship.

For many who’ve experienced an estranged adult child-parent relationship, it’s a mixed bag of feelings and expectations regarding reconciliation. Many times, though, the timing and potential rewards of not being separated are worth the risk. 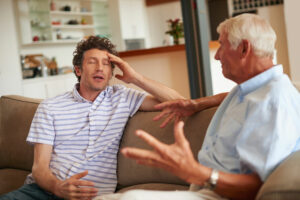 It’s been said that “time heals all wounds,” but is a healthy amount of distance from a family member enough to help make amends? Maybe. But probably not.

While it’s certainly easier to be open to the possibility of reconnecting after you’ve had some time away to process what was dividing you, it’s also important to learn how to set healthy family boundaries for successful interactions moving forward.

Of course, you still might not agree on everything, including even some important principles, but you’ll have a clear and specific strategy for better managing hurt feelings, guarding your emotional well-being, and addressing painful disagreements instead of holding them in.

Whether it’s pursuing healthier interactions with your biological family or learning to cultivate your own community and family support during or after recovery, the caring professionals at Rio Retreat Center at The Meadows are here to help. With life-changing workshops, including Family Matters that helps address dysfunction and repair those important family and friendship bonds, Rio Retreat has resources that address your specific needs. Reach out today to let us help you find the best fit for your situation.